The former head of Facebook’s elections division has written a book questioning the social media giant’s impact on politics, saying that it “is more likely to bring out people who represent just one facet of American life. The result is a world where everyone looks like they are living in their own bubble. 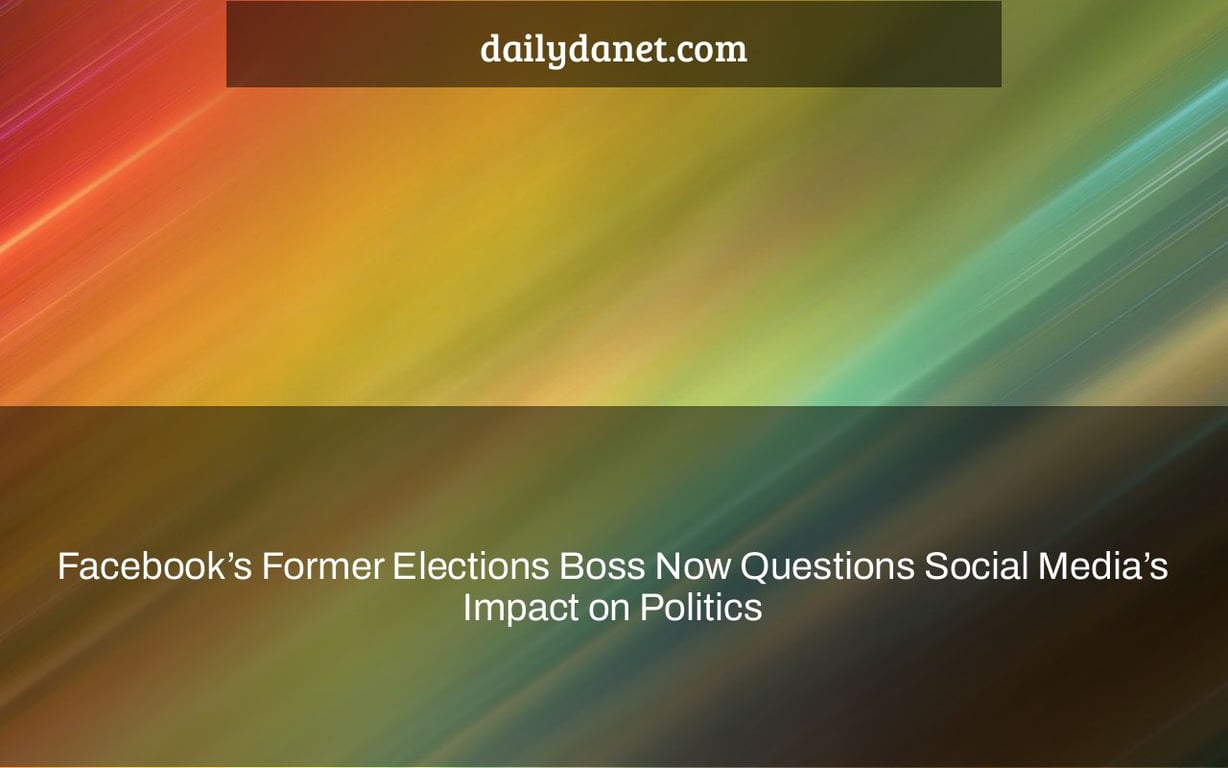 Katie Harbath joined Facebook FB -0.20 percent as the company’s first Republican employee in Washington, D.C., more than a decade ago, attempting to persuade sceptic members of Congress of the merits of the nascent social network for healthy elections.

Ms. Harbath was the company’s face on numerous political problems and a contact with governments and parties all around the globe in her work at Facebook, now Meta Platforms Inc. She claims that by the time she left in March, she had come to fear that unless governments and tech platforms intervene quickly, social media would certainly foster more political violence similar to the Capitol incident on January 6, 2021.

“In politics, I still feel social media has done more good than damage,” she adds, “but it’s close.” “Perhaps it’s 52-48, with a southward tendency.”

Members of Congress have compared Facebook and Instagram’s practices to the tobacco industry’s. Joanna Stern of the Wall Street Journal examines both sessions to see what lessons tobacco regulation may teach us about what may be ahead for Big Tech. Adele Morgan/The Wall Street Journal photo illustration

Ms. Harbath, 41, is the company’s highest-ranking former executive currently working at the Integrity Institute, a fledgling charity formed by former Facebook workers who focused on detecting and mitigating possible social damages caused by the company’s products. On these topics, the institution now advises politicians and think tanks all across the globe.

Ms. Harbath joins a growing list of former Facebook employees who have gone public with their concerns of the firm. She is now a fellow at multiple Washington think groups focusing on election problems. She claims she no longer feels her previous firm, particularly CEO Mark Zuckerberg, has the desire to solve the company’s basic issues in the manner she believes is required.

Ms. Harbath “helped represent the firm throughout the world,” according to Meta spokesperson Andy Stone. We appreciate her efforts and wish her the best.”

Ms. Harbath believes Facebook should do more to investigate the role its services have played in polarizing politics.

Ms. Harbath claims that Meta is so preoccupied with everyday problems that it neglects more proactive planning, and that her attempts to develop a strategy for election challenges in 2024 were ignored. She claims that operators would progressively erase the boundary between news and sponsored political propaganda if digital platforms such as Facebook do not create stronger boundaries between the two.

For example, those protesting the election results and organizing the marches that resulted in violence utilized Facebook and other social-media platforms extensively on January 6, 2021. She believes the corporation should be looking into whether it could have done more to prevent the violence that erupted on Jan. 6 and what role its platforms have had in polarizing politics.

“While they are correct that they do not bear complete responsibility,” she argues, “there should be more soul-searching.”

Mr. Stone said that Meta put a lot of effort into its 2020 election preparations and that it is still working on the problems she identified as a source of worry.

According to documents obtained by The Wall Street Journal, integrity workers believed the policy team often prioritized corporate and political considerations before user safety. According to Facebook, it has spent billions of dollars and recruited tens of thousands of people to avoid such damages.

“Katie was the face of the individuals who said no inside of Facebook,” said Sahar Massachi, one of the Integrity Institute’s founders. He described Ms. Harbath as “the respectable opposition,” crediting her with bringing political skill and contacts to the new group.

Ms. Harbath hails Meta’s work on voter registration and political ad transparency as innovative, and adds that as a consultant, she aims to assist other organizations in finding more ways to make social media a more positive aspect of politics.

Nu Wexler, who worked on the policy communications team with Ms. Harbath and is now a partner at a Washington, D.C. communications firm, says, “People know where to place a whistleblower and they know where to put a loyal business spokeswoman.” “I’m not sure where they’d place someone like Katie.”

Ms. Harbath grew raised in a conservative Wisconsin family in a paper-mill town, and she studied journalism at the University of Wisconsin.

She secured a job with the Republican National Committee after college, where her modest blogging experience gained her a position supervising the party’s digital-campaign operations.

She joined Facebook a few years later, ultimately overseeing a team of up to 60 people who educated political parties on how to effectively utilize the site and assisted in the development of the company’s election policy. She claims that there was a widespread belief inside the firm that increased Facebook use would make governments more transparent and increase people’s capacity to participate in public debate.

Ms. Harbath, who worked at Facebook for a decade and left in March, at her residence in Arlington, Va.

Ms. Harbath says her reservations about the notion date back to 2016, when disinformation flooded Facebook during elections in the Philippines and the United States, as well as the Brexit campaign in the United Kingdom.

Ms. Harbath claims that after that, her focus moved from promoting Facebook as a beneficial force to preventing foreign governments, criminals, troll farms, and other negative actors from exploiting it.

She claims that as public criticism of Facebook grew, management focused heavily on what they referred to internally as defensibility—making rules based in part on whether the firm would face external assaults or criticism. She claims that “escalations”—an internal word for possible public-relations problems and high-profile complaints—took over her work.

“I spent 80% of my time dealing with escalations,” she adds.

According to her, a reorganization in her department robbed her of most of her power over election policy going into 2020, and the firm rejected her plan to concentrate her work on preventing electoral dangers before 2024, when a number of big worldwide elections are due. She was watching the violence at the Capitol on TV on January 6th.

“It was a pivotal day in choosing to quit,” she added. “I wanted to go someplace where I could really accomplish something if I wasn’t going to be able to make an influence within.”

Jeff Horwitz can be reached at [email protected]