Assuming a 40 hour work week and 52 weeks per year, this works out to $7.35/hour. That’s less than or just over the minimum wage in California, Connecticut, Hawaii, New Jersey, New York, Rhode Island, Oregon and Vermont.

“What the Fuck,” doesn’t begin to express the sentiment.

For more on the meagher benefits to compensate you from freeing the world, check here.

(Comment)
President Believed to Be Conservative!
By Dan | - 9:47 am - Posted in Politics & Policy, Liberals, Best Of, Media & Marketing

[Soon to not be a parody.]
The Daily Danet has uncovered startling evidence that President Bush may, in fact, be a conservative. There have, of course, been unsubstantiated rumors regarding his political affiliation. The facts, however, have been muddled by conflicting evidence. For example, the president has maliciously and repeatedly cut taxes, a clearly conservative and hateful tactic. These tax cuts, however, have been joined with spending increases, a normal and just response. Moreover, the President has not vetoed a single spending measure.

In recent days, however, a clearer picture has emerged. MSM has learned that, while travelling with the President, the press is forced to watch the facist, unbalanced and irrational Fox News [ptooie], an ultraconservative form of Al Jazeera. As if the mere fact that the press’s plane, Air Force One, receives such horribly distorted programming, is not enough evidence, the President’s new press secretary, Tony Snow, once even worked for Fox News [ptooie]! This fact has apparently gone unnoticed by other media outlets.

This unbaised journalist must therefore come to the sad conclusion that the President might just be a conservative [ptooie].

This is part 1 of our 238 part exposé on the impropriety of the Whitehouse’s connection with Fox News [ptooie]. Future parts will include: “Separate But Equal: Why Government and Journalism Should Never Mix,” by George Stephanopolous; “Separation of Journalism and State Government,” by Tim Russert; and “Serious NonPartisan Journalism,” by Katie Couric.

The map below is from the National Bureau of Scaring You Shitless. I couldn’t help but think of the game Risk. You always won if you got Asia first.

Of course, just like Risk, this map is ridiculously disproprortionate. One sick bird in Siberia and you get all of Russia.

More on the government’s pandemic plans when I have the patience to wade through it. I bet it involves duct tape.

If you don’t have a degree in geology, click the picture for context. 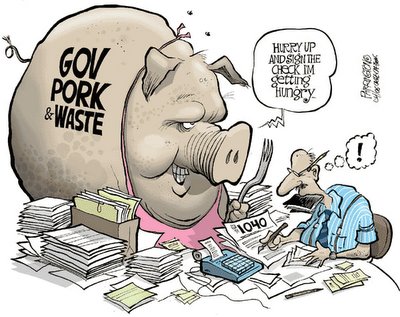 I suggest the following simple cure for the American tax problem: tie congressional pay to after-tax pay of the average worker. In fact, since they do have to talk out of both sides of their ass, let’s say the median household income, net of taxes.

It’s a fairly simple scheme: No congressman shall take any salary in excess of the median household income, net of taxes.

Therefore, under my plan, every congressman would have to live on $26,922 per year. Or cut taxes and actually stimulate the economy. This is also my plan to convert liberals into Conservatives.

[Not a Parody]
April 12, 2006. Paris. Jacques Chirac, man of principle, caved into protesters today and announced he would replace the new labor law with one that is as toothless and impotent as, well, France. This was the first time in the 216 year history of the French Republic that the country actually surrendered to itself. On the bright side, it is also the first time since the revolution that any Frenchman has been on the winning side of a conflict.

Katie Caustic is being paid $60,000 per day by CBS just to read a teleprompter with a concerned look on her face. $60,000 per day. That is nearly twice what the average American makes in a year.

Not only that,but little miss progressive will have paid her full social security for the year by lunch time on January 2. If she chooses to set aside the maximum amount for her 401(k), she will hit that maximum before she has her morning coffee that day. By the end of the first week, she has already made more than 90% of all Americans. For reading the friggin’ news. (I use “news” here to mean, of course, the liberal propaganda that passes for such at CBS.)

Now, I’m not against anyone earning a lot of money, but I am against hypocrites telling me what I should do with my money, trying to raise my taxes and then hopping in their limos for the ride all the way back to Park Avenue and 92nd street.

Let’s hope little katie can find a way, any way, to use all of her fortune and fame to finally do, what Dan Rather couldn’t: find an IBM Selectric typewriter that uses superscript.

Global warming is a fact. Sure it is. According to the most eco-deranged estimates, the Earth has warmed under .5 degrees Celsius over the past two decades. That means, by the time you’re dead it will be unnoticeably warmer than when you were born. April 30th will feel vaguely like May 3. Poor baby.

The polar ice caps are melting at about an inch a year–yes, it’s true. That means that by the time you’re dead, we will have lost about 5 feet of ice in a place so inhospitable, that penguins can’t even live there year-round. Again, for the penguins, this means April 30th will feel like April 27 (south pole, different seasons).

This could cause worldwide sea level to increase at about 1/2 an inch per decade. This means that, by the time you’re dead, the high-tide stains on your favorite pier will be two fingers higher. Egad!

The more important and oft ignored question, however, is how long has this been going on? 10,000 years. Temperatures have been rising, ice caps have been melting and sea levels have been rising for 10,000 years. I’m not terribly well read when it comes to pre-Egyptian society, but I find it very hard to believe that Mesopotamians were cruising around in SUVs and using AquaNet.

To blame global warming, which, by definition naturally occurs between ice ages, on human activity is the height of hubris. Much like a mosquito with an erection, floating down the river shouting “raise the drawbridge!” As a more concrete example, one of the people I work with looked out the window today, saw snow and said “global warming, I guess,” and then proceeded to blame George Bush. How do you even begin to correct someone like that?

I’m sure that now that Katie Couric is at the anchor desk, all of this confusion will be cleared up. Hard facts and objective reporting–that’s what I’m looking forward to. I’m sure she, and the mainstream media will have this all sorted out by the time April 30th feels like May 15.

Katie Couric moves to CBS. I guess the C no longer stands for “Columbia.” I’ll leave it to you to decide what it stands for now.

French students and other unemployables are striking, protesting and rioting again. For a people that have not (successfully) defended their freedom since they were ruled by a short man in a tri-corner hat, they do love to protest. This time, it’s over the right to fire incompetent employees. The rioters are obviously against it.

Keep in mind, this is not for government workers. This is everybody. (That reminds me, what’s the difference between a U.S. government employee and a French private company employee? Hygiene. Just kidding, there is no difference.) The college kid who works in a bookstore for the summer gets these benefits. The mildly retarded kid who works at Le BlouqueBustierre gets 5 weeks of paid vacation and 10 additional days off. That’s 7 weeks you are paying someone NOT to work.

It’s no wonder that the French businessmen are anxious to change the law. When you create such a huge disincentive to hire employees, no one gets hired. The economy stagnates and depression, economic and emotional, sets in. Hell, you might as well have elected Jimmy Carter president.

It also makes me wonder how dysfunctional the French educational system is that its student-rioters cannot even do this simple math. Or maybe, they just can’t see past their prominent, up-turned noses.