Regarding the invasion of Israel and the kidnapping of three Israelis, Hizballah leader Sheik Hassan Nasrallah said “We did not think, even 1%, that the capture would lead to a war at this time and of this magnitude.” Thereby proving, beyond a shadow of doubt, the mental capacity that it takes to rule the “party of allah.”

“I mean, we thought, maybe an angry letter or some kind of stern warning. Certainly we would not get a card at Channukka. But to protect your borders and people with the military–this is unheard of.” He later added, “look, if you’re going to be so serious about it, we’re just not going to play anymore.”

In related news, Prime Minister Koizumi noted that Japan, even 60 years later, remains surprised that the United States reacted so “rashly” with regard to the events of 7 December, 1941. “I mean, it was just a couple boats in a harbor.’ 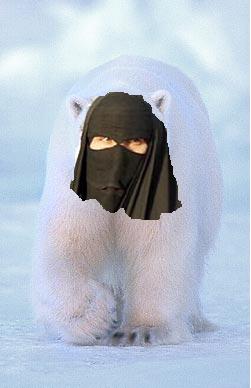 What did I say? I don’t recall. It was so long ago. Did I make a prediction? Let me think…oh yeah! I said that some idiot was going to claim that global warming makes it colder! Turns out, I was half right. It was two idiots.

Drs. Hayley Fowler and David Archer have (apparently) authored a paper, a peer-reviewed paper, no less, that says that global warming may be causing Himilayan glaciers to grow. That’s right, the warmer it gets, the more ice there is. Does that make sense to anyone?

At least we can finally lay our minds to rest about those drowning polar bears! If it gets bad in the Arctic, they can move to Pakistan!

I caveat my vitriol with the following: The BBC article makes no mention of how these men link glacial growth with global warming (other than the headline). I assume that they do, but if not, my apologies gents. It would, however, make me more correct in my prediction, the idiot in question being the BBC writer.

Mayor Ray Nagin has once again distinguished himself as America’s preeminent Mayor. After failing to follow his own advice regarding evacuation plans, and negligently causing the death of thousands of innocent residents, Mayor McChocolate has made amazing progress in revitalizing the city that sleeps with anyone.

The Mayor’s office announced today that its headquarters, pictured today at right, had been reopened. “We got most of the corpses out and that should clear up most of the smell.” When asked about how his staff would be able to work in such conditions, he noted that “Look, this is N’awlins. Nobody actually shows up for work.”

In response to accusations that the City’s clean up crews have been slow to clear the “city” of its shanties, thatched roof huts and corpses, he was clear where blame should lie. “Look, Bush hates Black people. The national guard’s been preventing the clean up.”

Mayor Hershey added, “that’s alright. You guys in New York can’t get a hole in the ground fixed and it’s five years later. So let’s be fair.” Indeed, it took the City of New York just over 8 months to completely remove every piece of debris from the terrorist attacks. Mayor Cadbury Egghead’s ignorance of the distinction between clearing and rebuilding of private property was attributed by his staff to a lack of gooey goodness under his chocolatey shell.

In addition, the citizens of New York, in recognition of his ode to 9/11, have again named Mayor Nagin Putz of the Year, 2006. This is the second consecutive year the Mayor has won the title. His other laurels include “Architect of Disaster: How to Ruin a City With Incompetence;” The “Race Baiter 2006: Chocolate v. Vanilla, Why I Hate Whitey;” and the “DNC Projection Award for 2005: Why Bush Is Responsible for my Failures as a Human Being.”

When did CNN hire Bin Laden?

[Before you post a comment, please realize that this is sarcasm, I know they’re referring to a special report on bin Laden.]

It occurs to me that a lot of people are being inconvenienced because another bunch of peace-loving Muslims wanted to blow up more planes. As scrappleface notes, what is it with these psychos and planes? They’re like scared little monkeys, angry at the big metal bird.

As I understand it, the plot was to use liquid explosives, such as nitroglycerine or notroethane (very disturbing site, by the way). These peaceful followers of Mohammad would smuggle them onboard in drink containers and set them off in flight, killing all the passengers and countless others below.  So now no one is allowed to bring drinks or any other kind of liquid on board. Much like the teacher punishing everyone when the erasers disappear.

Why not make them drink instead? These things, in large doses, may be lethal (or here: if NJ says it’s hazardous, lookout!). Anyone who shows up at security, wanting to bring a drink on board, has to take a big swig and swallow. Not only will this allow normal humans to go about their business, it will also help to eliminate a substantial portion of the savage population.

August 21, 2006
Boston, Massachusetts. Kofi Anan again dispatched a high-level emissary to this battered region in the hopes that the bombers would once again stop. Having decimated the local village of Fenway since Friday, the Bronx Bombers continue to ignore the cease fire agreement reached just days ago.

Tearful and dressed in boy-sized uniform, Francis McGullicudy laid his pennant hopes to rest with a handful of dirt that he let slip through his small fingers as the casket was lowered into the ground.

“I feel proud of my team. I’m proud they are martyrs,” says Francis at the intimate funeral in Thaniel Square, a village nestled along limestone hillsides and extensively damaged by five days of Yankee bombardment.

Several highly placed administration officials have joined the ranks of political commentators and think-tank experts, who have recently decried al Qaida’s blatant disregard for soft targets in the U.S.

“I think it’s high time that these terrorists were held accountable for these lapses,” said Bill Lohard, the newly named Secretary of Disclosing Security Weaknesses. “For nearly 5 years now, the press, private research groups, even this administration,” he continued “have all reported vulnerabilities in our port system, our airport security, even our nuclear plants. What will it take to get the message across?”

“There does seem to be a general lack of savvy,” noted P. Ompus Richardhead, a security analyst at the Society for the Advancement of Basic Operational Tactics Available to Guerrillas and Extremists. “There is a wealth of information out there on our vulnerabilities, even simple things like how to defeat airport security. You have to assume their heart’s just not in it anymore.”

Messrs. Lohard and Richardhead’s comments come just days after a private think-tank announced that a nuclear explosion at a US port would cause a catastrophic loss of life and an enormous amount of economic damage. “We really had no idea that that would happen,” explained Secretary Lohard. He noted that that the administration had assumed a few ships would sink and the people would need to drink bottled water for some time. “We didn’t think it would be that big of a deal. Thank goodness for those folks at Rand Corp.”

Snow is falling on Johannesburg, South Africa. To be fair, it is winter in the Southern Hemisphere, but snow is exceedingly rare in that part of the world, and it’s causing more than a bit of trouble.

No doubt the morons who spout their venom about global warming will find a way to twist this into their theory: “Oh, well drastic climate variations are definitely caused by global warming, regardless of what the results may be. It’s still climate change.” They may even try to make you feel stupid: “So you think that global warming is so simple that it only means increasing temperatures?”

Don’t let them fool you. First, this is weather, not climate. Climate, by definition, is weather in a particular location, averaged over a long period of time. If it snowed in NEW YORK today, August 16th, it would not be “climate change,” thought it would be a welcome relief.

Furthermore, global warming is all about warming. It is ridiculous to say that global warming, the increase of the average global temperature, will cause the average temperature to decrease on the globe. So what’s happening? Nothing. Just periodic variations in weather.

Last week, I returned from two weeks in lovely Negril, Jamaica with Mrs. Sudonym. The Dow Jones had jumped about 300 points and the Yankees found themselves 3 games ahead of the Bosox, having won 80% of their games in my absence.

This can mean only one thing: The Keep Dan Out of The Country Fund is now accepting donations. A donation of a mere$350 per night (excluding airfare) can help provide Dan and Mrs. Sudonym with the level of comfort to which they have become accustomed. If you call now, there may still be hope that the New York Football Giants will continue their 1 game winning streak.